The traditional Kashmiri wedding is quite a sophisticated affair.  It constitutes of a series of traditions which are religiously followed by both the bride and the groom and their respective families.

Today on Gyawun, we are going to give you an overview of how the whole process of Kashmiri Muslim weddings is carried out. ‘Manzimyor’ is the Kashmiri word for a local and professional matchmaker. Families hire a Kashmiri matchmaker to make a profile of the girl/guy and spread an official word out that, ‘They’re looking for a rishta ( a match)’

After the ‘Manzimyor’ makes a profile of the girl or the guy, his next job is to present their details at a compatible family’s disposal. He leaves the details of the guy/girl at the interested family’s house giving them time to decide whether to take it forward or not.
This process is called ‘Parché traavun’. The interested family then enquires about the whole matter on a personal level. 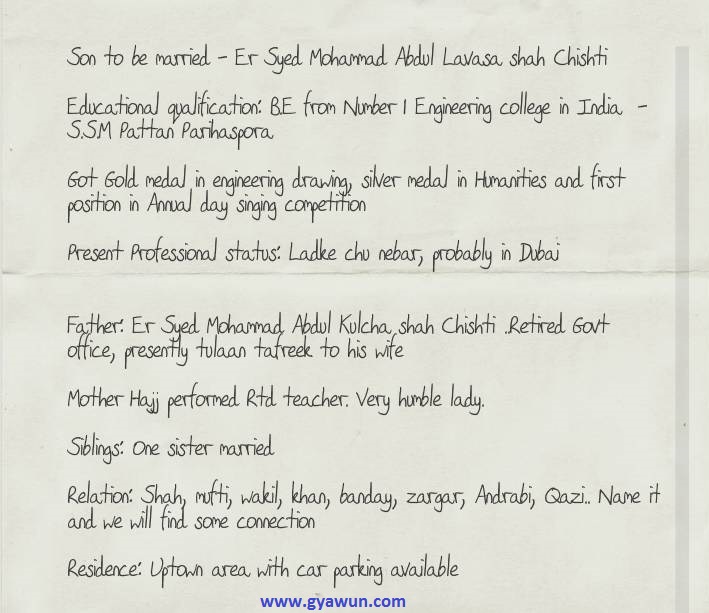 Once both the families are satisfied after enquiring about each other, the next step is to see the potential bride or groom. Sometimes this procedure is carried out with the parents accompanying the girl or the guy but sometimes it constitutes secretly barging into each other’s workplace without revealing one’s identity. Some families choose to organize a formal meet of the bride and the groom at astaans (shrines) or restaurants. The method may vary but a rishta is only finalized after the ‘vichni gasun’ tradition. The consent of both the potential bride and groom are equally important.

After the approval of both the guy and the girl, the family of the groom gifts the bride a lot of gold usually in the form of necklaces and King Edward stamped coins which are locally called ‘Poend’ in the valley and this is how they officialize the match.

Later ‘majmas’ (huge spread out copper plates) of sweets,dry fruit and confectionery is sent to all the relatives to announce the wedlock.

Nishayn or engagement may be a simple one or may be a Nikah Nishayn . In Nikha Nishayn Nikah is read, and the relation is fully legalized.

In Nishayn close relatives both men and women from the boy’s side come to the girl’s house. The girl side also invites close relatives, friends, and neighbors. Since the boy does not come to the function the girl’s side sends a trami, Kokur daeg-cooked chicken to the boy’s side along with Chochi- special bread to groom. The boy’s family distributes this among their relatives, neighbors etc. this is reciprocated by sweets from the boy’s side. The girl’s family distributes these sweets to its kith and kin.

After Nishayn its ok for the bride to be and groom to be to go for dates officially.

Post Nishayn is followed by customs lie  “Roz-kushada” – which is something sent (like money, gold, wazwan etc.) by the boy’s family to girl’s family during Ramdhan, Eid visits where the girl/boy get tons of eidi by the in-laws and other customs like exchanging Halwas and Harissas.

Throughout the engagement period, the girl’s family does shopping for Wardan items like shoes, bags, clothes, shawls -things that the bride would take to her new home. While as grooms family purchases gold to be gifted to bride during wedding.

When the families finalize the dates for the wedding then a get together called ‘Saatnaam’ is held at their respective places.  It’s a function to announce the wedding dates amongst close relatives and is celebrated with the women showering blessings on the couple in the form of Wanwun (Kashmiri songs sung on auspicious occasions) and a feast. 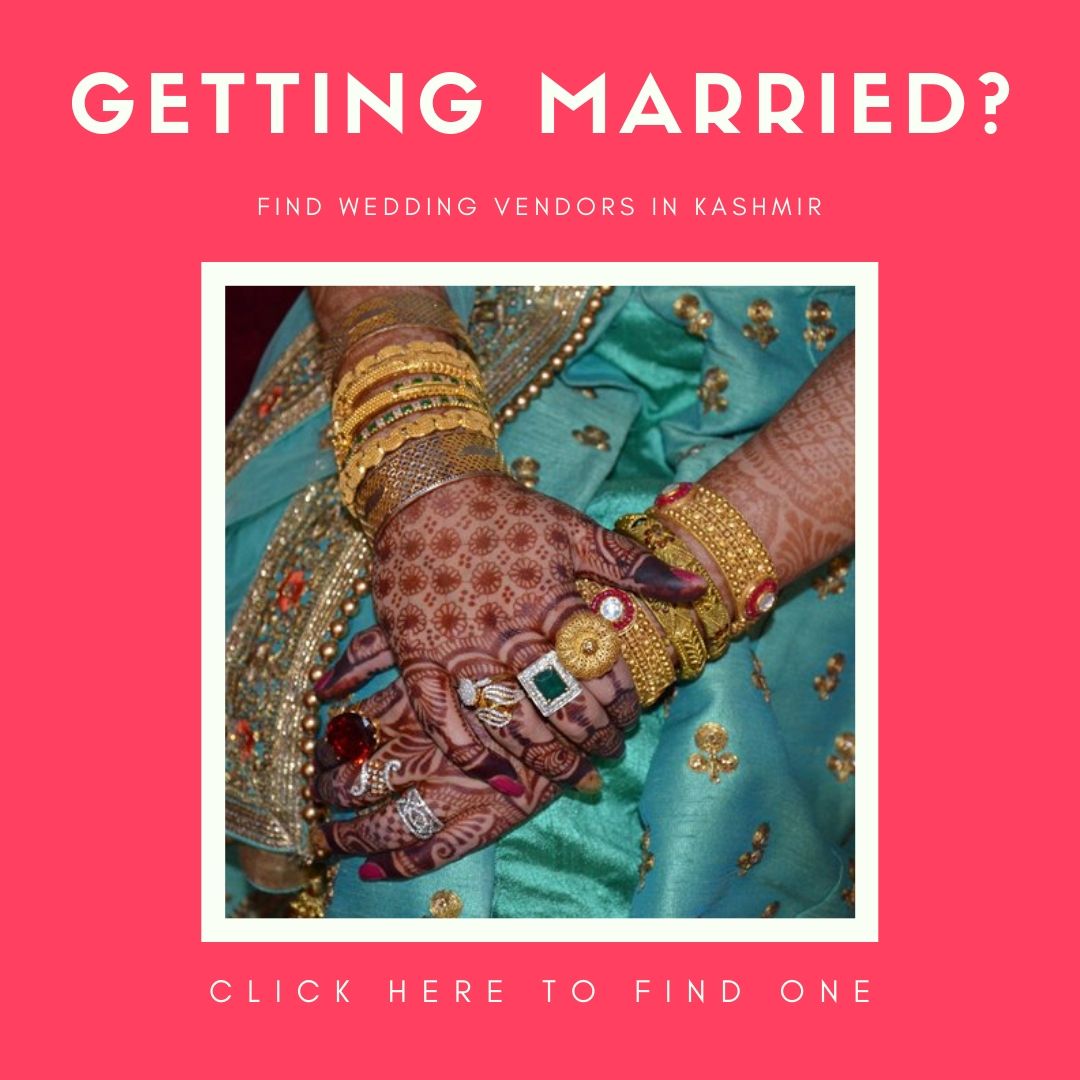 Quintals of rice is bought a few months before the wedding.The females of the family sit together and clear the rice of all kinds of impurities. This is done on traditional Kashmiri ‘shups’ ( Wired planks made out of wood from willow trees to separate edible rice from impurities)

The ‘Malmaenz’ (Also called ‘Mayun’ and ‘Haldi’ in other countries of South Asia) starts off the main celebration of the wedding. It is characterized by the traditional ‘Mas Traavun’ (Letting down the bride’s hair). The elder women of the family oil the bride’s hair and tie it into various tiny braids (Locally called ‘Waankh’) and wrap them with colorful ribbons. Then these women sing the famous Kashmiri wedding songs and undo these fancy braids one by one. The night before the Nikah is called the ‘Maenzraat’. The bride’s hair is tied in many tiny braids. In a ritual called Mas Muchrawun, her friends and family members start to open the braids and comb her hair. On this night,the bride applies henna on her hands and feet while near and dear ones apply a teeny meeny amount of henna on the groom’s little finger too which is followed by wrapping it with a 500 or a 2000 rupee note as a sign of good omen. The local wedding singers are called and songs are sung throughout the night until dawn. On the morning of the nikah the bride does ‘ghusl’ that is, she takes a bath and cleanses herself for the new beginning of her life. She is usually accompanied by her mother or an elder sister or a friend. After the bath, she wears the traditional Kashmiri Pheran with tilla work done on it (Hand woven embroidery done with silver or gold thread) and offers two rakath of namaz and recites verses from the holy Quran. The Nikah is carried out modestly and can be done both ‘asaalatan’ (in the presence of both the bride and the groom in close proximity) and ‘wakalatan’ (in the presence of their witnesses). The Qazi recites the Quranic verses and makes dua for the newly wed couple. Usually the Nikah Khwaani is carried out on the morning of the wedding lunch but some do it the first thing after the Mahraaz (groom) arrives. The Yini Wol is the day when a large number of people including relatives, friends, neighbors, colleagues and acquaintances gather for lunch and bless the couple.The guests are served a magnanimous feast called ‘the Kashmiri Wazwan’ which consists of a long list of mainly non vegetarian delicacies. 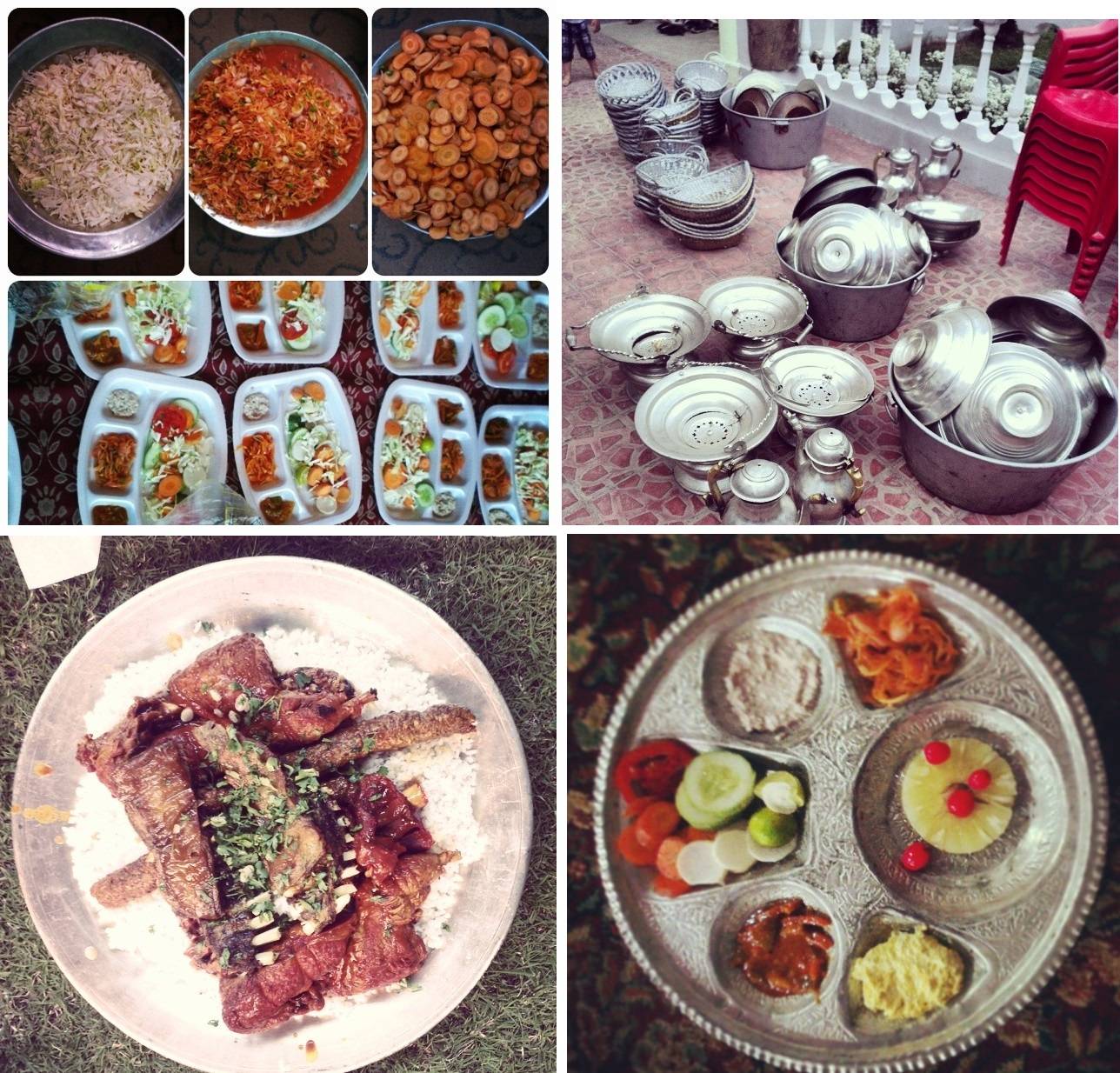 The groom and the people with him are together known as the ‘Baraatis’ and they’re given a very royal treatment. Groom is made to sit on Masnand- a platform made of the finest silk carpets. The copper plates that they’re served food in are beautifully carved and polished. The menu they are served has a lot of add-ons other than the regular food items. Right from the appetizers to the desert, everything is a superior version of the lunch served in the daytime to other guests and relatives. This grand feast is known as the ‘Mahraaz Saal’. 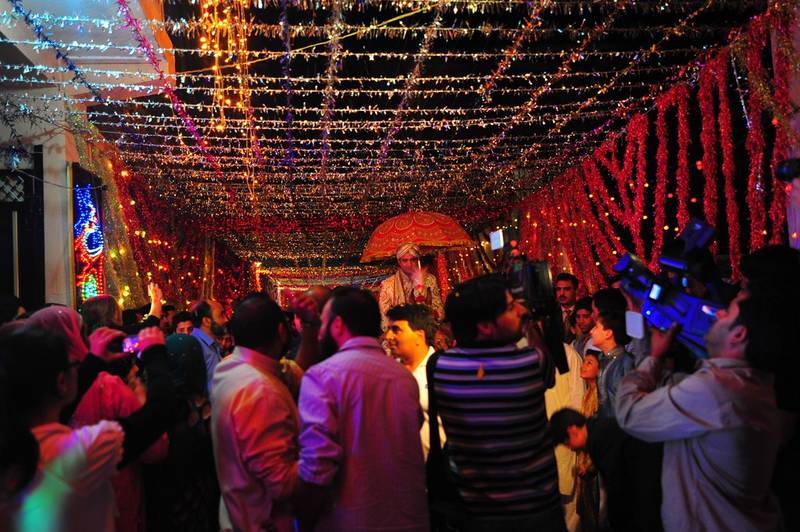 After the ‘Baraat’ comes and has dinner, the bride finally has to bid farewell to her family members and leave for her new abode called ‘Waeriv’ (The husband’s house) in the local Kashmiri language. She permanently moves out from her house to live with her husband in his house. The farewell of the bride is a very emotional moment for the entire family, especially the bride and her parents. During the return journey of Baraat, the groom’s vehicle is stopped by his friends at a bridge crossing  and they demand money from him. They dont let him pass the bridge  until he pays them (Kadal-e-taar).

After reaching the groom’s house, bride is welcomed by the mother in law and a goat is slaughtered in her honour. The mother in law lifts the veil of the bride (Muhar Tullun) so that she is seen by the gathering. The close relatives give her gifts. Women in the gathering sing traditional marriage songs. The following day the groom’s family hold a feast called the ‘walima’ where they invite their family, friends and people from their community.

All through the following days brides relatives except parents visit the couple and give them gifts mostly in shape of cash.

A few days after the bride has moved in with her husband in his house,the bride’s family invites the couple and the groom’s family members and near ones for a meal at their house. This invitation is that of ‘Phiri Saal’. The guests are attended with a lot of sophistication and with the best of hospitality.

Following the Phiri Saal, the couple goes back to the groom’s house. The immediate seven days after the wedding are also considered festive and are celebrated. It’s a famous Kashmiri tradition that the bride wears seven different colors on these seven days and does not do any regular household chores. On the seventh day of the wedding, guests from the bride’s family are invited over for a feast at the groom’s house. This day is known as the ‘Satim Doh’. Once the function has ended, the bride takes permission from her husband and in-laws to go live with her parents for a few days and then come back to her so-called ‘Waeriv’ which is now considered to be her new home.

After bride returns to her inlaws, all aunts and cousins visit her just to make sure she is doing ok, this is referred to as Phirra Khaber.

This marks the end of the festivities and the wedding celebrations. We, as Kashmiris are very fond of our rich culture and the rituals and we thoroughly enjoy them which is why every non-Kashmiri should definitely attend one Kashmiri wedding once in their lifetime. It’s quite an experience!