“She said if God would ask her where she would want to die, her request would be in Kashmir, on a hill in some small hut.“

This might not sound usual or even true to some, but it did happen.

She was daughter of a fauji. She was raised in army cantonments all over India. For her, a man in a uniform was a hero, a savior of fellow Indians and possibly the only big thing next to God. I was a typical Koshur, born and raised in Kashmir. For me every man in the army uniform was a villain in disguise and  guilty of killing and harming innocent Kashmiris.

It all started 2 years ago when we used to work together. Initially, we were only colleagues to each other,engaging in only formal conversations. We clicked when she added me on Facebook and liked a decade old picture of mine on Facebook. I messaged her to tell that it was quite an old picture that she had liked, and that’s how we ended having a long chat that night. We talked and shared our dreams and passions which, surprisingly, seemed to match even though we came from such contrasting backgrounds. Things took a different turn after that day and before we knew it we were in love.

Our relationship was like just any other relationship. We too had our moments of fun, conflict, laughter and bad times, and but somehow it all revolved mostly around Azadi and Army.

We often used to troll each other about our backgrounds. The level of trolling was so high that on Independence Day when I was in Kashmir, she posted a picture of Jai Hind on my desk in the office and WhatsApped me the picture, wishing a happy independence to Kashmir from India. While I in return during India Vs Pakistan matches showered full support to Pakistan and tagged her on all posts on my Facebook.

During our fights she would call me a Jehadi, or a gaddar and make statements like “Why don’t you look for some Kashmiri girl with apple coloured cheeks instead?” Her last resort used to be to ask me questions like why I worked in Delhi if I wanted freedom from India. My savior slogans revolved around the lines of how I wanted Azadi from her too just as I wanted Azadi from India.I would also ask her why she didn’t find an abusive Army man for herself. Our blazing nationalism for different causes so high that sometimes even an argument on WhatsApp last seen would end up in an India VS Kashmir VS Pakistan battle. 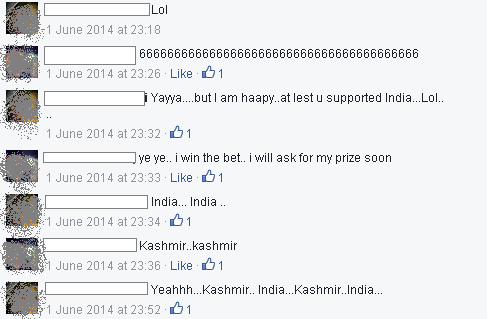 I remember one time we had a talk about who was better of the two – an Indian army man or a Kashmiri Mujahid. The discussion started with her calling Mujahids terrorists and me retorting by calling army men as paid murderers. Her points were that army men leave their families to fight for the nation and some even die in this. My counter argument was that, that was what Mujahids did too then. They also left their families for a cause – a cause which every Kashmiri believes in – and they are not even paid for it. They are meant to die one day. My question to her was that – who was better of the two men with guns, the one who got a regular salary to feed his family and could take a leave to go home or the one who could never go back home, didn’t know how his family would feed themselves when he is gone ? After we were done with pointing out all the cons of both the army and the Mujahids, it boiled down to one thing. She maintained that Mujahids kill innocent people while the army was savior for Kashmiri people and I kept my stand and asked who the army was saving us from; Mujahids are one of us, they are Kashmiris, they might get training from PoK, but they are the ones fighting to save us from army. I was not ready to accept the rather untrue nationalistic chorus that the army was there to protect us. And this discussion went on till one of us gave up.

These statements were often made during heated arguments. When we would be calmer, we used to discuss politics in detail, analyze pros and cons, share ideas and listen to each other with open minds.

One time, we were discussing how things would work if we ever got married. I declared that I was a firm believer in the freedom movement and I might even join the freedom movement someday. Her answer was that she would fight for the Kashmiri cause in my absence, in case I was in put in prison. She had started believing that Kashmir deserved Azadi but she wouldn’t say a word against the army as she had grown up as an Army man’s daughter. She believed that it was the job of the Army to save the nation no matter what and that the government had misused them for their vested political interested.

In another discussion she asked me if I would want to convert her to Islam if we got married and if my family would accept her being a Hindu. My answer to her question was that I might be a Muslim by birth but I have never read the Quran, I offer Namaz only on Eid and since I wasn’t a practicing Muslim and had little knowledge about any religions, how could I force her to convert? It would completely be her decision to be whatever she wanted to be. The only thing I asked of her was that when she would die I won’t let her burn on the pyre as I wouldn’t be able to see her being burning in front of my eyes. I would prefer her to be buried instead.

She would also ask me that if we got married, would I ask her to wear a burka? She had preconceived notion about Kashmir including this one about how every woman wore a burka in Kashmir. I told her that I would not ask her to do that as not everyone wears a Burka in Kashmir; Kashmir is quite different now, we are in times of MakebySaba, and sophisticated parlors and boutiques. Though women covered their heads, that was by their personal choice.

I asked her how her father, an army man, would see me as his son in law. Would I be looked upon as a terrorist sympathizer, a Love Jihadi even? Her answer was that her father had many friends from Kashmir and though professionally he might have been in the army, personally he had nothing against the people of Kashmir.

Last year she went to Ladakh via Kashmir with her family and stayed at Badami Bagh cantonment area for couple of days. Her family wasn’t willing to go around Srinagar, not even Dal lake due to the fear of something happening to them because they were related to the Army. But she was adamant on seeing Srinagar (what she called “The Land of my Love”). She compelled her family to visit Dal Lake, shop at lal chowk and to have food at Mughal Darbar. She texted me from there all through,expressing her love for the place, the hospitality and innocence of the people in Kashmir that she witnessed. She said if God would ask her where she would want to die, her request would be in Kashmir, on a hill in some small hut.

Though she returned from the valley with her family safely, she passed away just couple of months after that. Her dreams of living and dying in Kashmir remained unfulfilled. I miss her. I miss the kind of person she was. She taught me how people with different ideologies and values could still be together and respect each other. She showed me how by listening without any bias and putting yourself in someone else’s shoes you can feel the suffering of someone else, which is something that you won’t be able to do unless you are willing to get out of your preconceived ideologies. If I find people more people like her I would be more than happy to say Jai Hind in chorus with my Hum kya chate! Azadi.

She showed me love was possible anywhere – I found love in the kind of person many Indians would label anti national and many Kashmiris won’t imagine themselves with, but she was something else, and I miss her every single day. Did you like this article? We’re a non-profit. Make a donation and help pay for our journalism.