Skip to content
Article by Sumaya Teli ‘Sumaya Teli is a British Kashmiri now living in the USA with her husband and three children. She is founder and writer at mamanushka.com ~ a popular lifestyle blog rooted in experiences of being a western global Muslim, Woman and Mother. Recently I photographed some pherans on the beach! This cool opportunity came when I attended this year’s KGNA – held in LA California. After my popular blog post about pherans (read here), fashion show organizers for KGNA asked me to source pherans for their annual show. I knew just the designer for it and in return for the loan of her gorgeous pherans, designer Iqra Ahmed of Tul palav fame asked me to photograph them for her. Read on to see why this meant more to me than just photographing an item of clothing. Look at this show stopper of a red velvet pheran with gold tilla embroidery. I already had my friend Sabra down as the perfect model and we gathered a couple more fellow pheran affectionados who would be up for taking a few photos. Despite all of us being on a super-tight schedule, taking a few photos turned into a full on outdoor photoshoot in Long Beach Los Angeles! We quickly donned pherans on top of what we were already wearing. This is actually one of the best things about a pheran – the fact that they are supposed to go over your comfy outfit and are a one size fits all. I styled each pheran with traditional Kashmiri jewelry ( with a couple of bohemian add ons), here I wrapped this shawl on Faiqa’s head in what is nowadays considered a very old fashioned style – mostly seen on more ‘mature’ women in Kashmir and even then mostly in villages. I actually think it’s such a lovely and unique way of tying the hijab.

This amazing pure silver headpiece is actually a necklace! It was sourced by a jeweler from Sopore from amongst the Gujjar craftspeople. This nomadic tribe of Kashmir are the only ones who mostly make these now. The necklace is part of a set with the the bunches of hooped earrings worn here by Zairah (in green) underneath her skull-cap type hat ( also designed by Tul Palav -after a traditional topi worn by women in Kashmir called kasaabe’ ). The earrings are so heavy that they are suspended on some string and not actually in the ear lobes, although I’ve seen many a low hanging ear lobe on elderly women in my childhood!

Here’s a better view of that kasaabe’ and suspended earrings. 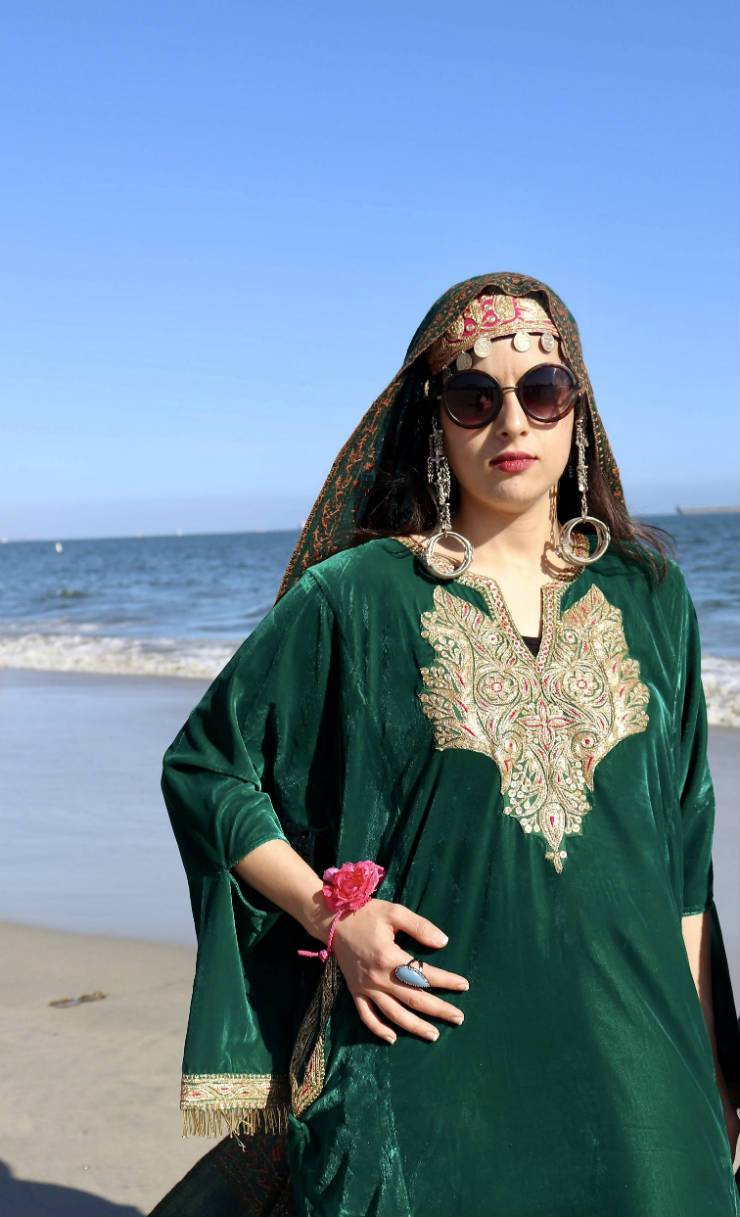 I can’t get enough of how cool this looked. On top of the cap, I draped a Kashmir shawl fully embroidered with Sozni stitch work. It’s actually my wedding shawl! 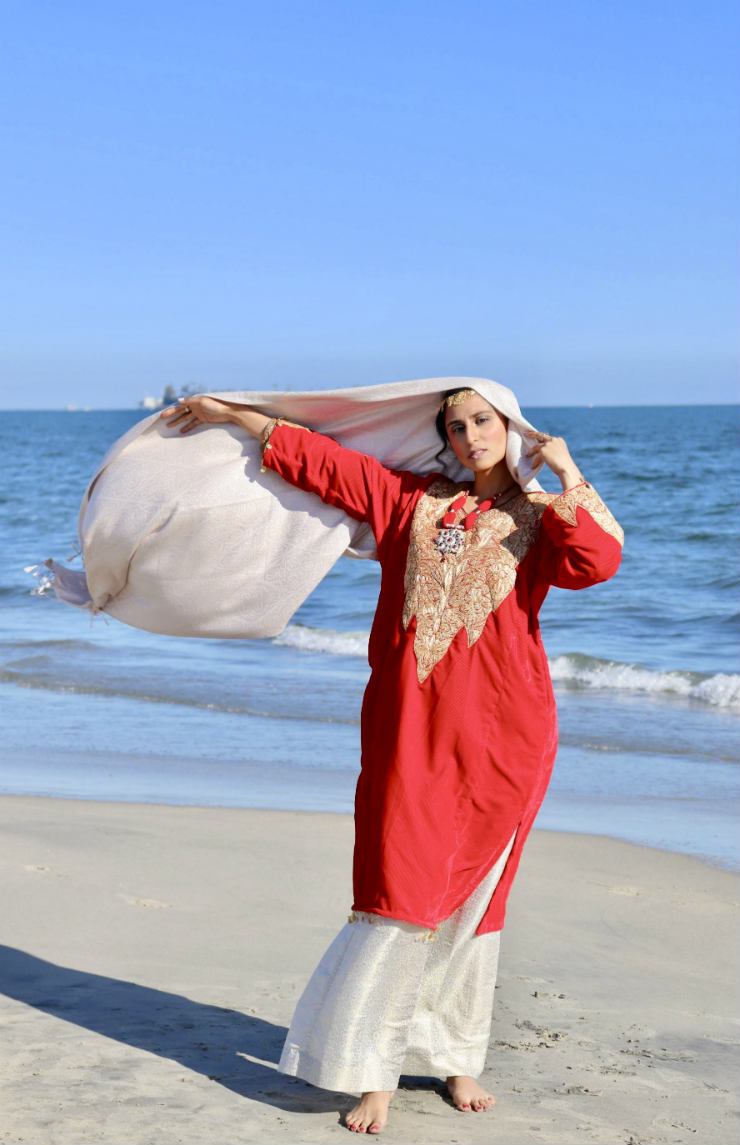 My vision was Pherans and the Sea. Kashmir has no beaches of it’s own, since it is a Valley surrounded by the Himalayan mountains so I was looking forward to the incongruity of the ‘look’. Don’t you think the photos ended up coming through as wonderfuly freeing in spirit? Sabra, Faiqa, Zairah and Maysa looked so stunning, confident and regal that, not surprisingly, they turned a few heads. We were spotted by someone who introduced himself as a photographer working with models and makeup artists (probably in Hollywood – who knows? After all this was LA) he went on to give the pheran clad ladies a few tips and direction in striking just that right pose!  It felt like an episode of America’s Next Top Model! Amongst smiles and waves and many well meaning compliments we were described as ‘Persian Princesses’. Kashmiri actually, replied Sabra assertive yet polite as ever. ‘Ah Kashmerian’ (came one reply) We all looked at each other – how many times have we heard that? And I just knew. This is it. We want to take Kashmiri back. Back from the cultural appropriation by Bollywood, back from the Orientalist narrative of the ‘exotic’ back from the Persian Princess trope … I want people to look at this dress and know the word Pheran (pronounced fe-ran). To look at this embroidery and know the word ‘tilla’. For someone in LA or London or Lahore to look at this ensemble and say ‘Kashmiri’ (not kashmirian or Cashmere? ‘like the wool?’) I want Kashmiris who have dismissed the pheran as old fashioned, to see themselves in this and recognise the precious garment they have folded away in their mother’s and grandmother’s trunks (because grandmothers in Kashmir don’t store clothes in closets and wardrobes – they still using their old school galvanized steel trunks!) 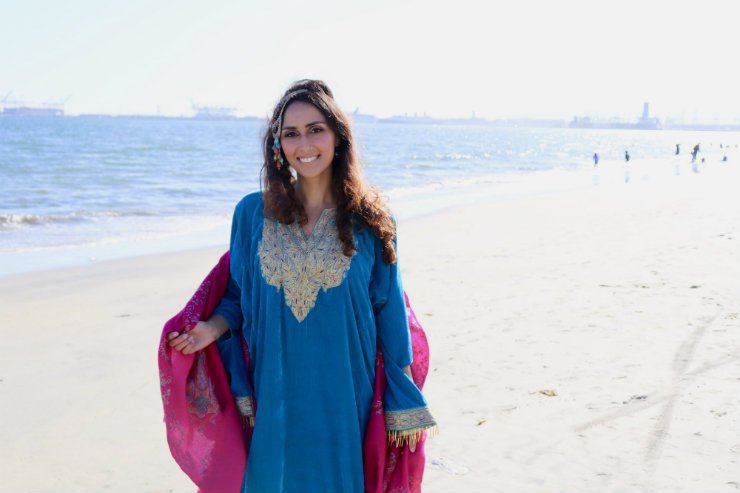 I love the fun twist Iqra Ahmed, the name behind Tul-Palav, has put on the sleeves of this pheran. Traditionally the Quraab daar (or Koraab) sleeve, features an embroidered slit at the inner elbow, through which the wearer can extend their hand. The rest of the sleeve is then pinned back – so it doesn’t flap around. Normally quite a formal look and ALWAYS pinned back – on this pheran the Quraab sleeve is lighter and the gold tassels add an element of surprise and modernity. 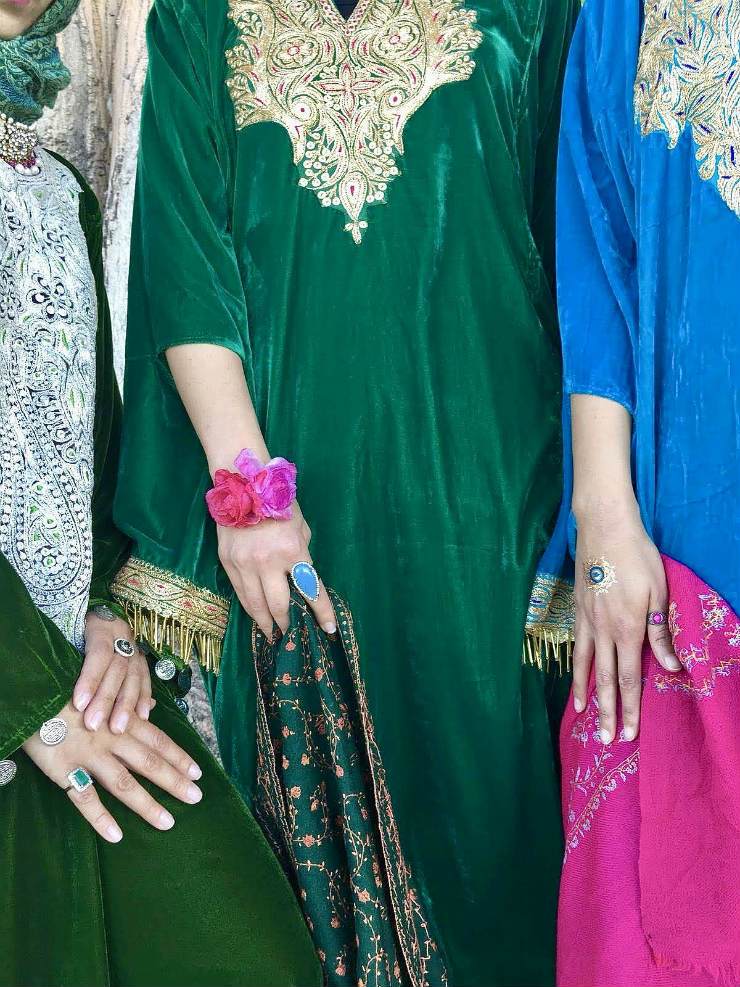 Pursuing a career in fashion design is not easy for many women in the Asian subcontinent. More so in a place like Indian Occupied Kashmir where unemployment in its younger generation is at a critical level and parents still have a heavy hand in directing the career paths of their offspring, usually pushing them to pursue vocations such as Medicine or Engineering. The concept of Fashion Design is totally misunderstood. As Iqra says herself – ‘at first people thought I was trying to go for modelling’. There are a number of savvy influencers from Kashmir that I have loved seeing emerge these past few years through social media platforms. One thing that stands out is the passion for Kashmiriat and the preservation and representation of it to the world. Iqra Ahmed is one of them. There are others like Amir Wani (Kashmir Through My Lens), Rumaan Hamdani (The Other Rumii), Bisma Parvez (painter and Artist) and Muheet Mehraj (Kashmir Box) to name a few. What is it about Kashmir that inspires and fuels this creativity? Decades of political and practical oppression, de facto martial law and military impunity have had a huge impact on health and educational infrastructures and employment opportunities. It’s an environment in which people are forced to survive – not thrive. Perhaps it’s the paradox of beauty in pain, of oppression itself, nestled, no, that is too gentle a word to describe the way oppression has torn into some of the most naturally breathtakingly beautiful topography in the world and into the psyche of its people. Maybe paradoxically, that has given oxygen to creativity. With its language, culture and national integrity under threat, it is heartening to see the next generation of Kashmiris step up and take on the challenge in ways they know how. These young people have worked through financial losses caused by frequent internet bans across the region due to political unrest. They keep working through physically and emotionally draining situations to bring Kashmir to the world. Not every warrior carries a sword. Some carry a pen, a needle, a paintbrush, a camera, an idea. This is my ode to kickass Kashmiris, especially the kool Kashur Kooris – the women of Kashmir – from the saints and poetesses of past, the multi-faceted- talented creatives of today and to all the women of Kashmir, who on enduring pain and loss still emerge graceful, strong and true torch bearers for their cause. We are a force to be reckoned with.